Due to an absence of the pigment pheomelanin, its fur is a completely different color. Here are some White Tiger Facts for Kids that you may not know about:

1. There’s a widespread misunderstanding that white tigers are just Bengal tigers with albinism.

2. Due to the common association between snow and Siberia, white tigers are frequently misidentified as Siberian tigers.

3. Only when both parents inherit the recessive gene for white fur may a white tiger be born.

4. A white tiger’s coat is creamy white, its eyes are blue, and its stripes are gray or brown.

5. White tigers can grow 3 meters in length and weigh 300 kilograms.

6. These creatures specialize in hunting carnivores. They have excellent swimming abilities and hunt on land and in the water.

7. Rare genetic mutations can cause white fur. Normally orange-furred Bengal tigers have white fur due to a lack of pheomelanin, a pigment normally present in Bengal tigers.

8. Its striped body is a natural disguise in grassy and wooded environments, where it thrives.

9. White tigers may kill an animal that weighs nearly a ton because they can take on prey greater than they are. 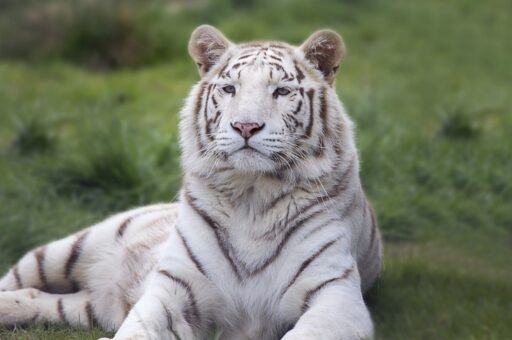 11. Like Siamese cats and Himalayan rabbits, White Tigers respond to cold by producing an enzyme that causes their fur to darken.

12. They’re striped; those stripes are either black or dark brown. Any given tiger will have its one-of-a-kind pattern of stripes.

13. They hunt many different species, from monkeys and birds to wild cattle and even deer.

14. White tigers only go on hunts once every few days, so when they catch something, they eat until they are satiated.

15. Whether or not it is visible to the human eye, all white tigers have crossed eyes. In every case, the white coat gene also wires the optic nerve to the opposite side of the brain.

17. Due to their reclusive nature, they rarely interact with others.

18. In the dark, they can see perfectly. The night is when they do most of their hunting.

19. Only 12 white tigers have been documented in the wild over the past century.

20. Maharaja Martand Singh of India was the first to capture a white tiger in 1951 successfully. 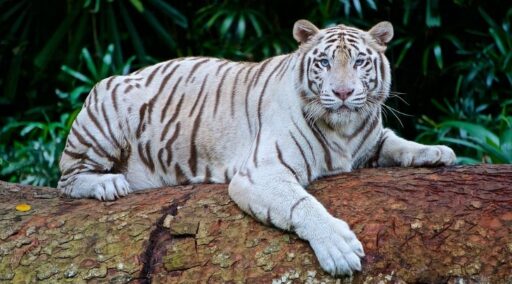 21. There must be at least 20 square miles of wilderness for a white tiger to survive and thrive.

22. A white tiger in the wild would be extremely unusual, but you can see them occasionally in the woods and grasslands of Southeast Asia and some parts of India.

23. At around three years of age, a female white tiger reaches sexual maturity.

24. A tigress will be pregnant approximately 3.5 months after a successful mating. Typically, three to four cubs are born.

25. The black stripes on a white tiger’s skin would still be evident even after a shave.

27. On average, a tiger can expect to live about ten years in the wild. Most white tigers spend their entire lives in zoos or private collections, likely contributing to their increased longevity (up to 15 years).

28. Tigers can easily navigate the water. Their massive, webbed paws and powerful bodies allow them to swim up to seven kilometers simultaneously.

29. Like a person’s fingerprint, a tiger’s stripes are unique to that individual. The tiger stripes on each animal are unique.

30. There is a chance that you may see a white tiger without having any stripes at all. 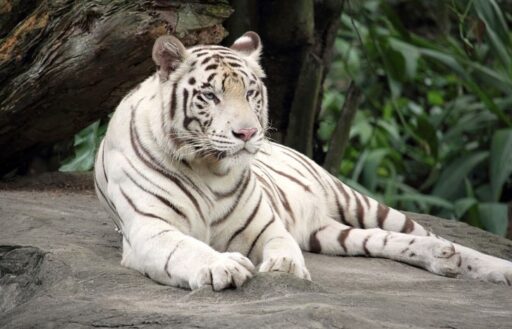 31. In its natural habitat, the white tiger faces no threats from other animals. It is largely because of their massive stature and aggressive demeanor.

33. The last wild white tigers disappeared more than a century ago, yet their ancestors hunted in much the same way as today’s orange Bengal tigers.

34. To our knowledge, a trophy hunter shot and killed the last wild white tiger in 1958.

36. Unfortunately, White Tigers suffer greatly from the effects of inbreeding. Because of this, many newborn cubs don’t make it.

37. The commercial breeding and inbreeding of white tigers are illegal due to new regulations.

38. The survival of the white tiger depends on the existence of Bengal tigers with the necessary gene.

39. Popular amongst kids, the TV show Power Rangers has a White Tiger as one of the Rangers. 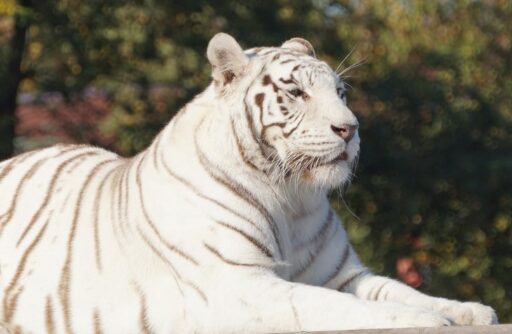 White tigers are one of the most beautiful animals in the world. Zoos earn a lot if they have a white tiger in one of their cages, as people love to see them.

Here, I end this article on the white tiger facts for kids. Stay connected for more amazing factual articles.