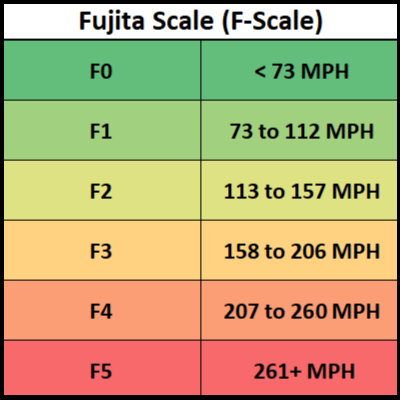 The Fujita Scale is a tornado rating scale. A tornado is rated from one of six categories (F0, F1, F2, F3, F4 or F5) on this scale. The weakest tornado is an F0, while the strongest is an F5. It was developed in 1971 by Tetsuya Fujita, with support from Allen Pearson. In 1973 the Fujita Scale was updated to include the width of a tornado and the distance it traveled. NOAA retroactively rated tornadoes from 1950 to 1972 in its National Tornado Database.

The Fujita Scale was decommissioned in 2007 and replaced with the Enhanced Fujita Scale. Below you’ll obtain information about each one of the six rating categories for this scale. Additionally, we provide pictures of tornadoes for each category on this scale. You can click on the name of each category to learn more about it and find out what tornadoes were given that rating.

Below are descriptions of each of the six categories (F0 through F5) on the Fujita Scale.

An F0 Tornado will cause light damage. Winds less than 73 mph (116 km/h). There will be some damage to chimneys, trees will have branches broken off, trees with shallow roots will be pushed over and signs boards will be damaged.

An F2 Tornado will cause considerable damage. Winds between 113 and 157 mph (181 and 253 km/h). Framed homes will have their roofs torn off, mobile homes will be destroyed, train cars can be overturned, large size trees can be broken in half or completely uprooted, very small objects can become airborne missiles and cars lifted off the ground.

An F3 Tornado will cause severe damage. Winds between 158 and 206 mph (254 and 332 km/h). Roofs and walls can be torn off even from well-constructed homes, entire trains can be overturned, almost all trees will be uprooted from, the ground and cars will be lifted off the grown and thrown short distances.

An F4 tornado will cause devastating damage. 207 and 260 mph (333 and 418 km/h). Well-constructed homes will be destroyed, manmade structures with weak foundations will be blow away, cars can be thrown sizeable distances and small objects will become airborne missiles.

An F5 tornado will cause incredible damage. Winds greater than 261 mph (261+ km/h). Strong framed homes can be destroyed, objects the size of a car will become deadly airborne missiles, bark will be removed from trees and other incredible phenomena will occur.

Pictures of Tornadoes by F-Scale Rating 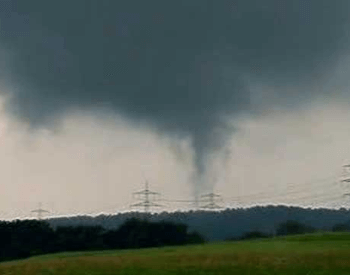 A picture of an F0 Tornado. 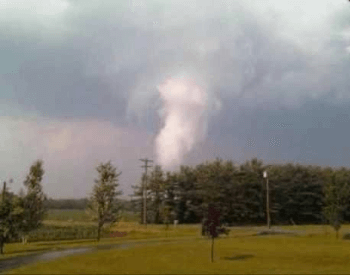 A picture of an F1 Tornado. 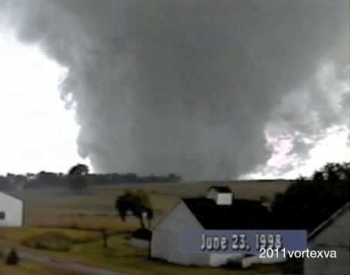 A picture of an F2 Tornado. 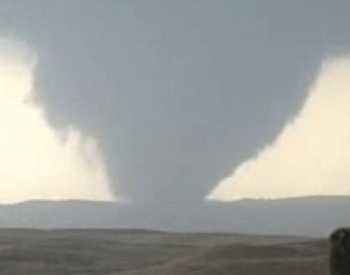 A picture of an F3 Tornado. 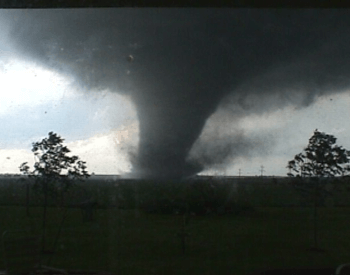 A picture of an F4 Tornado. 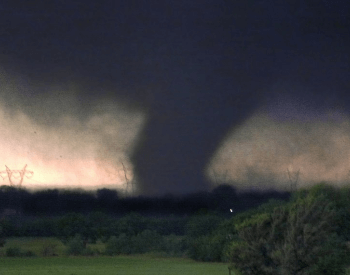 A picture of an F5 Tornado.